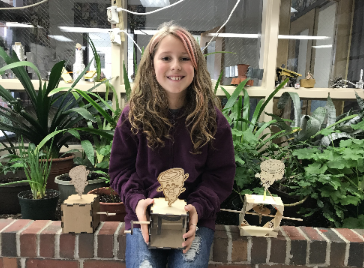 The first round of RREV (Rethinking Responsive Education Ventures) Awardees were announced in August of 2021. RREV is an initiative of the Maine Department of Education, funded by the Education Stabilization Funds through the US Department of Education’s Rethink K-12 Education Models, that bolsters Maine educators’ innovative efforts to support their students with agile, effective, and resilient learning experiences that improve learning outcomes for all students. Now, after a year of experience and development, the Department of Education would like to thank the awardees for their dedication to innovative education and highlight their achievements that have resulted from the RREV contracts over the past year. Continue reading to learn more about the ways in which St George Public Schools has used their RREV funding this past year.

Since being named a RREV Awardee last August, St George Public Schools have been working with Mid-Coast School of Technology to create a PreK-12 Career and Technical Education Program. The program builds upon a long tradition of place-based education that grounds student learning in the history, traditions, and natural environment of St. George and provides a model for preparing students to develop the technical, creative thinking, and social-emotional skills to thrive in an innovation economy and strengthen local and regional economies by meeting existing labor force needs and creating new businesses and industries.

The program implementation and increased Makerspace use over the past year has had an “energizing effect” on the community, Superintendent Mike Felton says. “Teachers are saying thank you and getting excited,” Makerspace Director Paul Meinersmann added. It’s not just teachers that are excited, though. Students are loving the “hands-on, minds-on” learning, too. One student that was feeling disengaged at the start of the year now aspires to be an engineer after spending time using the equipment in the Makerspace.

Part of the engagement, the educators say, comes from the independence and confidence instilled in the Makerspace. Students are asked “What do you want to learn?” rather than being told what to learn, and, once they feel comfortable completing a task on their own, they are allowed to do so. Another important aspect is that students receive credit for their work. A 5th grade student who helped design and create donor plaques for the new, soon to be constructed Makerspace was both surprised and proud to find his name engraved on the back of the plaques next to Meinersmann’s.

Another group of students who were beginning to feel disinterested had the opportunity to work in Apprenticeshop in Rockland. The Apprenticeshop has hosted a Junior Boat Building program that the school has participated in for multiple years, but this year, instead of a boat, the students built a toboggan. Once their toboggan was completed, the group of three students took their toboggan to the US National Championships to compete. The construction of the toboggan reengaged the students in their learning and captivated their minds by showing them just a few of the possibilities open to them after graduation.

The district is working up to build a PreK-8 CTE/Makerspace Building at St. George School, and Felton says this past year

has been integral to making the building successful when it opens. “We need vision and heart to fill the building,” he said, and that’s exactly what they’re building through the implementation of the program this past year.

Outside of the Makerspace access and use, fundraising efforts have also helped to spread the vision and create a network of people investing in the school. The community has collectively raised over $1,450,000, which includes the $250,000 from the RREV grant. Contributions came in every shape and size, from big and little donors alike. One family sold eggs on the side of the road to pitch in, while some individuals donors made contributions up to $250,000. In addition, 13 businesses have sponsored the project.

The school hopes to break ground on the building in the fall and to provide programming to every child. Felton sees the building, and the program as a whole, as an “equity builder,” a true community resource that’s accessible to everyone, all the time, that everyone knows they can use.  The school is looking forward to having the building completed by the end of the upcoming school year and is hoping to offer summer programming for students next year.

Although RREV funding ends June 30, 2023, the vision at St George does not end next year. In the long term, Felton says he hopes for the district to act as an example and a model for other schools and districts, not only across Maine, but across the country. The goal is to spread awareness about the power of this type of learning, which he views as increased student and family engagement, and job set up. By connecting and advocating with other states, Felton says he believes that other schools can be encouraged to connect higher career and technical education with younger grades, setting students up for success.

Martin Mackey, the former RREV Project Director who tragically passed away in April of this year, embodied the RREV spirit: to think and act boldly to meet the needs of students. His passion was to “change lives.” As such, he challenged each and every RREV participant to do just that as they designed pilot ideas that would ultimately have a lasting systemic impact on students.  After 18 months of leading RREV, Martin’s passion had been passed on to almost 200 educators who had participated in innovation professional development. From those educators, 27 Pilot ideas were brought to fruition and have received over $5.7 million in RREV awards. Through their pilot ideas, these educators have pledged to commit themselves to innovation.

The Maine DOE encourages all schools and districts across the State of Maine to learn more about these innovative educators and their RREV pilots through the RREV website and the online RREV collaborative platform known as EnGiNE. It is through EnGiNE that we all hope to continue the Martin Momentum to change students’ lives through innovative and responsive educational programs.